Wednesday, 14 April 2021
You are here: Home Dane Fife gets back to Indiana Hoosiers to join coach Mike Woodson’s staff 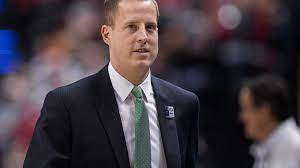 “Dane is someone who I have always had the utmost respect for,” Woodson said in a statement. “His knowledge of the Big Ten and his success as a recruiter will be an invaluable asset as we look to continue building a staff that will help elevate this program to the highest levels. I know his love for the Hoosiers and this university comes across the moment you talk to him.”

In 2005, Fife became the youngest head coach in Division I men’s basketball when he took the IPFW job – a title he held for the initial five seasons he was there. Fife went 82-97 in six seasons at IPFW, which is currently known as Purdue University Fort Wayne.

Fife was named the Big Ten’s co-defensive player of the year as a senior and holds the school record for takes (180). His shooting percentage (47.8%) in 2001-02 ranks 6th on the program’s single-season list and he won Michigan’s Mr. Basketball Award in 1998.