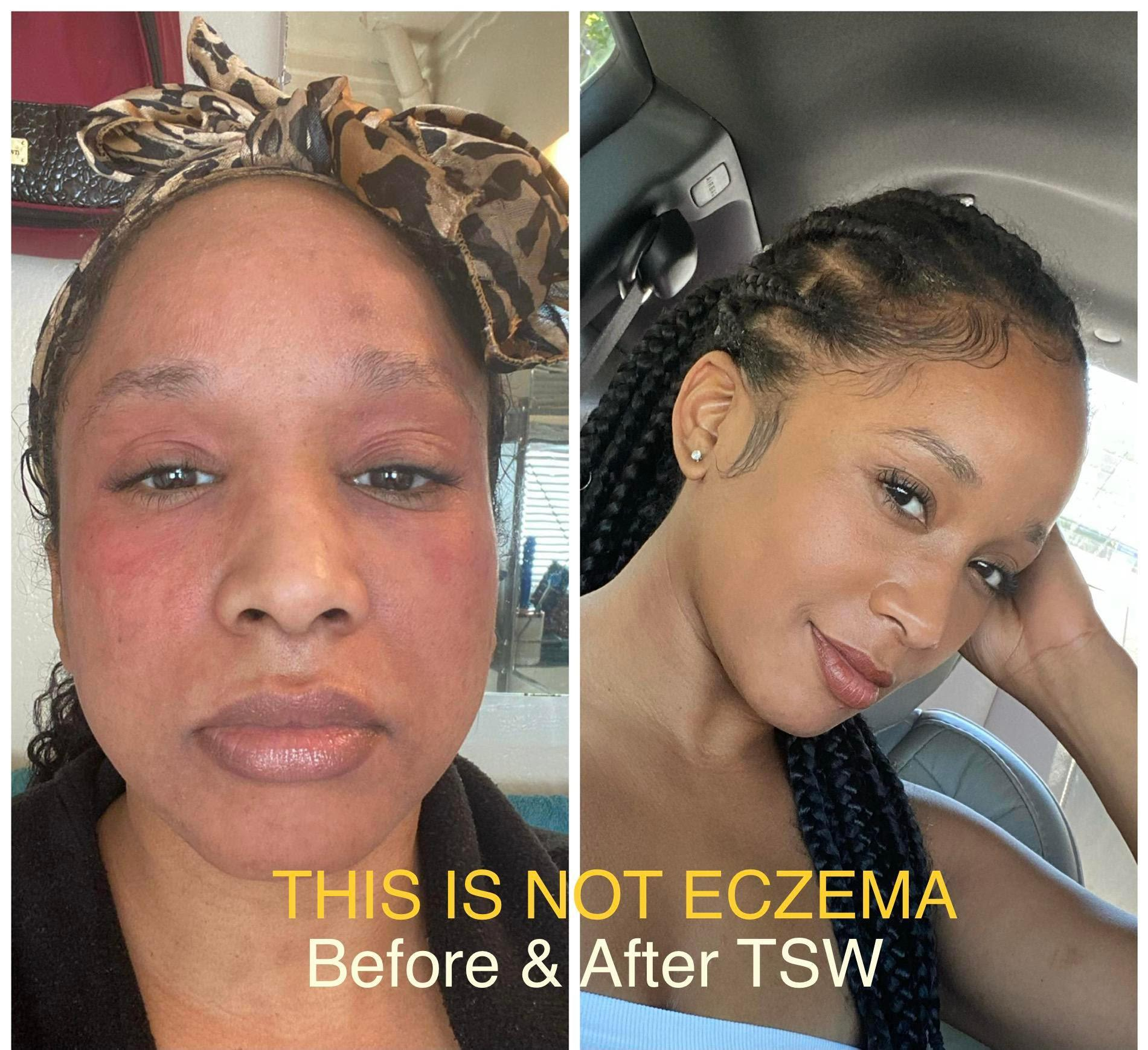 Lea Vasquez shares her Topical Steroid Withdrawal experience all in hopes of raising awareness of the long term side effects of Topical steroids for skin conditions such as Eczema!

It wasn’t exactly a happy new year for me, when the ball dropped I was stuck with ice packs on my face, body chills, nerve pain, uncontrollable hot and cold temperature changes and literally feeling like my skin was on fire. Wasn’t exactly a happy New Year for me. I was experiencing what is known as TSW. (Topical Steroid Withdrawal). When we think of steroids, we tend to usually picture them in a liquid or pill form but the truth of the matter is that steroids is steroids no matter the form.

Like many people, I was diagnosed with eczema at a very early age and was prescribed steroid ointment to alleviate the dry itchy skin. What I was not informed of was the possibility of the long term effects and withdrawal symptoms I might have to face 20 years later. That part was never explained to me by any doctor or written in any warning manual. In my early 30’s, I would come to find this out the hard way.

One day I went to my dermatologist office for a rash underneath my eye she called dermatitis. I was prescribed an oral antibiotic and told to stop applying any Topical Steroid face ointment until the dermatitis cleared up. At the time I thought, no biggie. Little did I know it was at that moment I would begin to experience an event that would change my life.

A couple of weeks later, my skin started to get very dry. I assumed it was my eczema but I didnt put any ointment on per my doctor until the dermatitis under my eye wet away. By the time the dermatitis left, my skin was more dry than it ever was. Parts of my skin was so dry that it started to resemble elephants skin. I immediately put some of my face steroid ointment on thinking what I was experiencing was eczema. When I woke up in the morning, my condition was the same.This was not eczema. I was in disbelief. This was the first time my trusty miracle ointment wasn’t fixing the problem. I immediately did what everyone does in times of crisis, I went internet and I’m actually glad I did! There I stumbled across TSA (Topical Steroid Addiction) and TSW ( Topical Steroid Withdraw) and realized it was possible for my skin to get addicted to steroid ointment, build immunity and experience the symptoms I was experiencing after not using the ointment on a continuous basis. During my quest for answers, It wasn’t long until I realized I wasn’t the only person going through this. There were thousands of people experiencing this and I would soon come to recognize them as TSW warriors. Many of their journeys if not exact were quite similar to mine. When choosing to heal themselves naturally most doctor’s would try to prescribe an even stronger steroid. I made the decision that these brave people sharing their stories would not be told for nothing. At that moment, I decided to stop all steroids and continue to go all the way through with TSW so that my skin could once again produce its own oils and not depend on steroid ointment. I researched that there were multiple ways to go through this process, but none were easier than the next

For the next couple of months, there were days that I would wake up and my eyes were almost swollen shut. During NMT, (No moisture treatment) there were days that my skin was so tight that I couldn’t close my eyes and I needed an eye mask when I went to sleep to give the illusion of darkness. The inflammation and swelling was like being on fire and the body nerve pain, hot and cold sweats was unlike anything I’ve ever experienced. I even lost 70% of my eyebrows. NMT did reduce my inflammation by 50% and ultimately increased the overall shedding of my unhealthy skin but it was the most uncomfortable and painful feeling I’ve ever experienced in my life. This method truly tested my patience but the reward was worth it.

When I returned to my dermatologist, sure enough I was offered a stronger steroid. I firmly declined . I felt like a drug addict and my dealer knew I was recovering but tried to get me to buy in my state of weakness. I know my dr. was clearly not as educated about TSW as I was or at least she didn’t voice it, but as I dug more throughout my research, I realized unfortunately that this was not a common thing. Majority of doctors are taught what steroids to prescribe but not how to treat a patient when the prescription now becomes the problem. Sadly TSW is not widely accepted in the medical field. It was scary at first, having no guidance, not knowing what products to use, if any. I even had my dr. ask me multiple times was I sure I wasn’t having an allergic reaction as she constantly kept trying to prescribe me ointment for eczema I was clearly not experiencing. No matter how many times I mentioned TSW to her, it was like a forbidden word that was never acknowledged. After coming to terms that this dr. had no helpful information to provide to me, all I could rely on was the stories of others who experienced or were experiencing Topical Steroid Withdraw. There I found support, hope, uplifting guidance and a sense of peace that I will be forever grateful for.

In transition to a healthier me, I changed my diet to a diet that consisted of anti inflammatory foods and literally threw away every makeup, lotion or product with parabens, harmful ingredients and/or preservatives that were  pretty to the eye products but horrible for the skin.  I had even come to realize the reason I would often get sick so easily and why I had a weak immune system.

Over the years, the common cold would often land me in the hospital and leave with me bronchitis for months! I was the friend that if you let out one sneeze near me, I would be sick for months, ultimately take a hospital trip and would recover at an abnormally alarming slow rate, while the average person got better the following week. I found out my old fri-enemy steroids, had the power to severely weaken my immune system. It was at that point that I realized not only had my skin stopped producing its own oils all together, but my overall health had been effected from the outside in. It turns out there were many times that I thought I was treating my eczema condition but I was really unknowingly just feeding my skins addiction. When your skin is at this point any doctor prescribing you a stronger steroid medication is just adding to a longer more brutal recovery in the long run. I on the other hand was ready for a change. I was ready to be healthy.

The first couple of weeks I researched many natural oils and butters that were amazing on my skin and also helped me get through my TSW in the early stages before I felt my skin was ready to do NMT ( no moisture  treatment) where you allow the dead over processed skin to fall off and you train your skin to produce natural oils on its own, without the help of steroids. Again make no mistake, NMT is a brutal, difficult physical and emotionally draining journey that has flaring side effects that can even last for up to 1 to 5 years ( when your body temporarily overheats). Tragically TSW has even lead to suicide which is all the more reason to raise awareness! Everyone’s healing time varies, but its a process no one should have to go through.

After becoming more knowledgeable of natural oils, butters and overall cosmetic ingredients, I thought to myself why wasn’t I using all the natural powerful remedies on this earth that the world had to offer me before? I thought why wasn’t I using this stuff before it came to this? As fast as those thoughts came are as fast as I made them leave. I quickly pulled myself out of that mind set. I couldn’t do the blame game. It wasn’t my fault that I wasn’t educated on the dangers of topical steroid usage. There was only room for a positive mind set moving forward. If I was going to get through this, I would have to continue to do my own research about what Is safe for my skin and body and move forward to a healthier me!

Throughout this process, I damn near became a chemist and starting picking apart every ingredient in lotions and makeup, you name it. At this point, I was on leave without pay at work for months. I was simply in too much pain and needed to stay home to heal. It was a trying time and it set me back thousands of dollars. The overall condition truly took me by surprise.

TSW was one of the hardest things I had to do but it taught me patience and enhanced the love I had for my body. Throughout every cycle of inflammation and shedding, the pain decreased and slowly revealed healthier skin! As soon as the pain eased up enough and I had more energy, I used that time to mix natural oils, organic butters and began educating myself on natural and vegan choices of ingredients that I could use to put on my skin when I was fully recovered. After countless mixtures and tons of research, I started developing, natural, safe and nourishing lotions, body butters, soaps and lipsticks and decided to not only share my story to raise awareness but share my products to the world. After the cease of all topical ointment, changing my diet and sticking to my natural products, the eczema I experience today is damn near non existent!