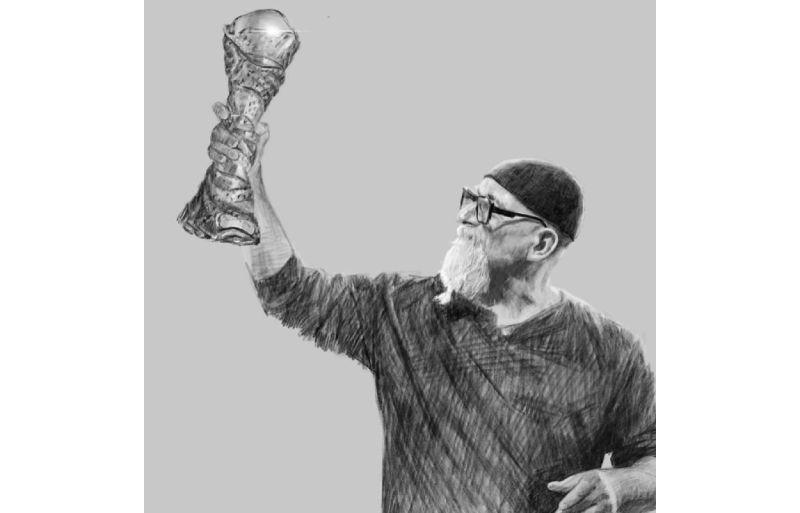 Let’s read about Ahmed Al Bahrani, OG of the sculptor industry and about one of his finest art

According to Ahmed Al Bahrani, The headdress is the most precious thing for all men and it refers to how all men came together to mend the rift.

The 47 cm tall trophy is made of white gold, weighs about 8.5 KG and is the sixth version since the biennial Arabian gulf cup first took place in 1970. Iraq hosted the competition in 1979 when they were crowned champions and they also won in 1984 and 1988.

On Friday, The eight team tournament returned to Iraq and the games will be played in the southern port city of Basra located on the mouth of the Arabian Gulf. It will run until January 19.

Unity was achieved in 2004 when Iraq returned to the competition but it is even stronger today with the presence of our brothers from the Gulf players and fans among us, Mr Al Bahrani said.

Born in 1965 in the town of Tuwaireej on the Euphrates south of Baghdad, the sculptor showed remarkable talent in modelling clay on the riverbank.

He studied in the Institute of Fine Arts in Baghdad, Graduating with a diploma in sculpture in 1988 before going on to teach there from 1992 to 1994. Mr Al Bahrani left Iraq for Amman and then headed to Yemen. Since 1999, He has divided his time between Doha and Stockholm, Sweden.

He has held many exhibitions and been commissioned for numerous public projects using his preferred materials of iron and bronze. He created the Olympic Rings sculpture for the 2006 Asian Games in Qatar.

He still has fond memories of the 1979 Gulf Cup in Baghdad recalling the trips from his hometown with his late father to Al Shaab Stadium to attend the matches.

The game that still sticks in his mind was Iraq thumping Bahrain 4-0 years later, He met Humood Sultan, Bahrain’s goalkeeper on the day in Doha and the two became close friends. Like many Iraqis, He is overjoyed to see the gulf cup return to the country.

I have been waiting for the tournament to be held again in Iraq and it is very nice to be in Basra. Ifeel proud and happy to see the championship taking place in Iraq and proud that the trophy is the one that I designed and created. This is not just a football tournament, it is a great opportunity for Iraq in general and Basra specifically to maintain normalcy and spur investment, Al Bahrani said.