Simon Wilkerson from the Columbia River Gorge Washington served in the United States Army for almost ten years. He was… 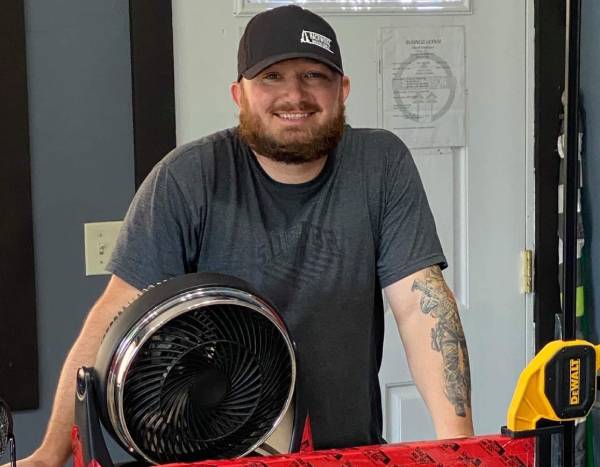 Simon Wilkerson from the Columbia River Gorge Washington served in the United States Army for almost ten years. He was medically retired from injuries sustained during combat. After exiting the service Wilkerson felt many different emotions and was unsure of what his next step would be. Simon knew that he loved working with his hands, but just didn’t know how to apply it. He began to spend a lot of time in his garage building things. He started building small items out of wood such as coasters, candle holders and wooden boxed shelves. He slowly graduated to small furniture like coat racks, shoe benches and party coolers which were a big hit. Then he discovered a YouTube video of a guy pouring epoxy into a mold creating a river table. From that moment Simon Wilkerson knew that’s what he wanted to do. He showed his wife the video and she encouraged him to go for it. Thus was the beginning of Wilkerson’s river table journey. He spent countless hours watching YouTube videos and reading everything he could about river tables and working with epoxy. Simon was so intrigued and eager to start. He invited a friend over and they  showed him what he knew. Wilkerson’s first river table was Cobalt Blue and about 3 1/2 feet long.

Simon wanted to go all out so he attempted an epoxy finish. It didn’t turn out as expected because he only applied two coats and neglected to pour the flood coat. Upon completion, he took pictures of the table and posted it to Facebook and his neighbor noticed the post and asked to buy his first river table as a gift for his mother.  Feeling pretty confident and motivated Simon jumped into another river table build. This time he wanted to build it bigger. Wilkerson wanted to ensure he didn’t make the same mistakes as he made on his first project. The second river table was twice as big and thick as the first one. This time he went with the color Deep Blue Sea.

With the second river table being larger then the first one it came with its own challenges and learning experiences. With courage, persistence and beginners luck Simon was able to successfully achieve great results. He also improved his epoxy finishing skills which ultimately complemented the wood grain. In the end, the second river table came out beautifully at 2 inches thick and over 4 feet long. His wife loved it so much they decided to keep it, and the Wilkerson’s have it to this day. Now with two river table built Simon discovered his passion for this type of work, and began a long journey of river table building. He experimented with various products, learning a little more with every build and continued to watch YouTube videos and connect with other successful woodworkers and professionals in his community. Wilkerson was intent to better his understanding of epoxy river tables. He had discovered a craft that he really enjoyed and that truly brought him peace and a new sense of purpose. With that being said, he didn’t become successful without the support of his community, friends and loved ones. Simon is extremely grateful that he can pursue his passion in woodworking through epoxy river tables and being a business owner of Cutting Edge Wood Design.