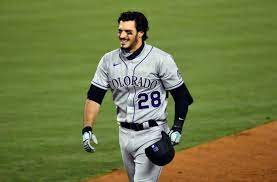 It hasn’t taken long for third baseman Nolan Arenado to settle into his new home with the St. Louis Cardinals. Since St. Louis procured Arenado in a blockbuster trade with the Rockies this past offseason, the five-time All-Star is looking strong so far with his new ball club.

During Thursday’s home opener at Busch Stadium, Arenado swatted a go-ahead home run in the eighth inning. Confronting Milwaukee, Arenado’s impact fell off a first-throw fastball from right-hander Drew Rasmussen to make it a 3-1 game for St. Louis.

The two-run shot is Arenado’s second homer on the youthful 2021 season. He’s hitting .360/.385/.520 (152 OPS+) in the early going. Arenado has been batting third between Paul Goldschmidt/Matt Carpenter and Paul DeJong. Thursday’s homer additionally acquired Arenado the first curtain call of his career.

“It’s the best feeling, it was unbelievable,” Arenado said in his postgame interview. “Just a great day from the beginning, never been a part of something like that and then obviously to help the team win here, it’s a great feeling.”

Because of Arenado’s homer, the Cardinals won their fourth consecutive game on Thursday. They cleared the Miami Marlins in a week ago’s three-game series at LoanDepot Park in Miami, and they’ll hope to proceed with their hot beginning when the three-game series against the Brewers proceeds with Saturday evening.

“We’re scrappy, we don’t give up,” Arenado said of his new team. “Credit goes to the coaching staff and all the way down. These guys come ready, they’re prepared, it’s just a great group, nobody panics and I’ve been really impressed with that.”

With the new declaration that the 2021 All-Star celebrations will presently happen at Coors Field, Arenado’s previous home ballpark, he becomes a great candidate during the current year’s Home Run Derby competition.