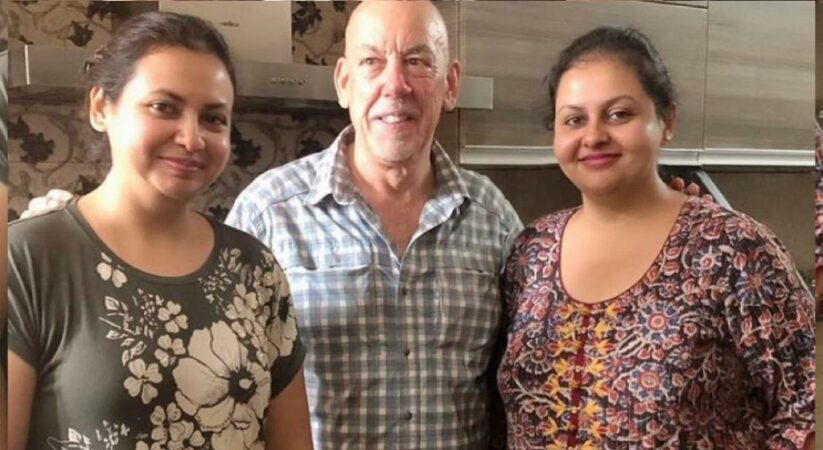 CauldronSisterss (Ratika and Riccha) are the sister duo, who’ve captured the field of food consultancy and culinary arts in the city of Jaipur. Not only on the local grounds but they have also established quite a recognized identity, among many master chefs, both nationally and internationally. One such story of immense honor and appreciation for these two leading ladies is their meeting with The Michelin Star Chef Steve Litke.

It is very common among chefs to explore several eating joints unlike typical tourists when traveling. They’re keen on checking out the local vegetable markets, getting in touch with the residents, and making an extra effort to know about the specific cuisine. This is what happened when world-renowned Chef Steve Litke visited India for some professional work event. As for an introduction, Steve is the head Chef of a food joint called Farmhouse Inn in Sonoma County, Northern California. The Michelin Star visited Delhi first and then moved to Mumbai for conducting his first-ever American food pop-up in a sit-down dinner set-up, exhibiting his farm-to-fork philosophy. After completing these exclusive events, Steve and his Chef friend Jon visited Benaras and Jaipur before catching a flight back to the US.

Grabbing this golden opportunity, CauldronSisterss (Ratika and Riccha) invited the star chefs over for a lunch gathering. As they describe, the expression on Steve’s face after hearing the word ‘homecooked food’ was confusingly overwhelming. Nevertheless, they were kind enough to accept the offer despite their tiresome 20-day schedule. But again, serving food to a Master Chef isn’t exactly a piece of cake, even for personalities like CauldronSisterss. Thinking about their preferences while carefully deciding your star dish, of course, the overthinking is endless. This is when their dear mother a.k.a their mentor and guide came to the rescue. Her advice, as CauldronSisterss stated, were 3 small words but a lesson of great significance. “Keep it Simple!” Reflecting on this very thought, CauldronSisterss decided to sideline all their fancy ideas and focused on presenting an authentic Rajasthani Cuisine. On the brighter side, even Steve and Jon revealed that they are more inclined towards vegetarian food.

Instead of serving those modernized versions of foods like sweetbread, sauteed exotic vegetables, or Blackberry Risotto, the star chefs were offered Desi Rajasthani Khana that is – Aloo Baati, Plain Baati, Dal, Kadhi, Gatte, Mirch Tipore, Meethe Chawal, and Papad. Quoting Steve’s reaction, “Honestly, I didn’t expect this food to come out so perfectly arranged and scrumptious. We’ve been in India for 20 days already and unfortunately, the kind of food we’ve eaten was extremely greasy and loaded with extra spices, which we think weren’t needed. We were truly yearning for what we’ve on our plates at the moment – something that India is known for!”

Highly impressed by the Rajasthani food, Jon also expressed how keen he was to know about the spices used to prepare Dal-Baati. That’s when CauldronSisterss revealed the Indian treasure box –  the Masala Dabba. Ratika further explained how Indian kitchens are incomplete without the wide range of masalas – from whole, chopped, ground, roasted, sauteed, fried, and as a topping. First comes the typical salt, pepper, turmeric, and then the complex combination of Khada Masalas like Javitri, Cinnamon, Jakhiya, Nigella seeds, black and green cardamom, peppercorns, bay leaves, etc.  CauldronSisterss also shared with the chefs her preference for growing all her herbs herself and using them fresh. “We use them in both fresh and dried forms.” Further expressing his eagerness Steve said, “We’re very keen on studying Indian Masalas. We plan to buy some for our home as well!”

“Not to forget these steel dabbas that are going home with me. I love how Indians store their precious masalas in these tiffins of all shapes and sizes,” added Jon.

Coming towards the end of this flavorful discussion, CauldronSisterss also presented to their guests the very famous masala chai. Refurnishing his old memories, Jon remembered the time he used to live in India back in 1971. He was living at a simple Asharam where he learned a lot about the rich, Indian culture. But more than anything else, his interest was inclined towards the Masala Chai. Jon also revealed that he tried the recipe back at his home and that’s how it became a favorite drink among his friends and family.

As the visit came to an end, Stevel mentioned how thankful and happy he was after the ‘fresh, light homecooked meal’. This surprising story of CauldronSisterss and their Rajasthani thali surely ends the myth about how chefs eat at home! “Keep it simple!”, that’s how it goes! As a goodbye gift CauldronSisterss (Ratika and Riccha) also gave a copy of their book, ‘India Ki Khichdi’.

Shining names in the world of food consultancy, CauldronSisterss also have a personal blog ‘www.CauldronSisters.wordpress.com’ where they actively post several interesting recipes and a variety of cuisines.