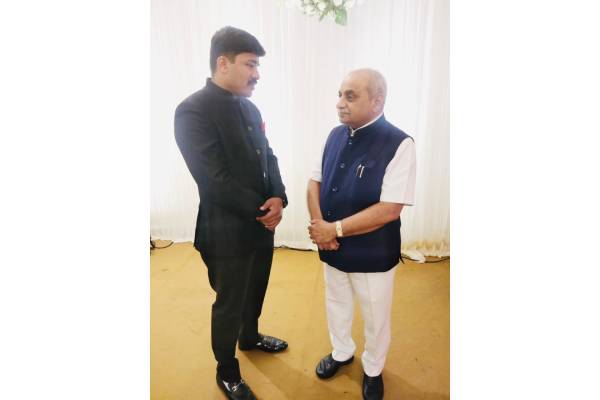 The young businessman and politician invited Nitinbhai Patel to Prayagraj at a recent meet.

It always seems a very surreal meeting when two well-known personalities meet each other and moreover even discuss important things about our country. A recent meet between Shrayam Bhargava, an ace young businessman and politician from BJP UP, and Nitinbhai Patel, the Deputy CM of Gujarat garnered great attention from everyone. We clicked their picture together and both the eminent personalities showed great grace and happiness meeting each other. Indeed, the picture says it all, looking at Shrayam Bhargava’s excitement level 100 and Nitinbhai Patel’s grace and humility.

Shrayam Bhargava just before the meeting was quoted saying that he was highly thrilled and happy to meet the respected Deputy CM of Gujarat and couldn’t hold his excitement to discuss many new things with him. As both of them met, they not only greeted each other but also had a good conversation with each other, where Shrayam Bhargava invited Nitinbhai Patel to Prayagraj, UP from where the young politician hails.

He requested Nitinbhai Patel to grace the ‘Magh Mela’ of the UP, which is a famous and well-known affair of the state. Nitinbhai Patel too showed great excitement to be a part of the same. Both of them were high on discussions and conversations that dealt with the development and welfare works undertaken in UP.

Shrayam Bhargava has also said that he believes in influencing and empowering the youth for them to gain access to a better tomorrow. He is a businessman who owns his publishing house and works with BJP, UP as the ‘Kshetriya Mantri’. Over the years, the young talent has said that he loves to motivate the youth and influence them in ways more than one.