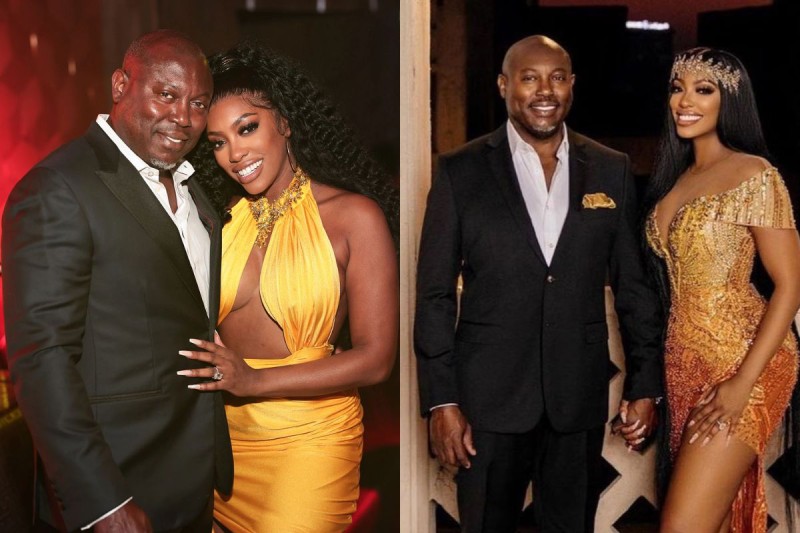 Porsha Williams is once again a Mrs.

People reported that the “Real Housewives of Atlanta” alum wed Simon Guobadia on Friday at the Four Seasons Hotel Atlanta in a Nigerian native law and custom ceremony.

Williams wore three different outfits throughout the day, which he described as “a true fashion extravaganza.”

For the ceremony, she wore an over-the-top, deep red, princess-style wedding gown with feathers and gold embellishments by designer Lakimmy, along with an okuku, a headpiece with Benin coral beads.

When she live-streamed it earlier this month, the 41-year-old reality star showed it to more than 2,000 of her Instagram followers by accident.

She changed into two different gowns designed by Tabik for the reception: one in gold and one in royal blue.

Purple and teal outfits were worn by the couple’s 250 guests, including several Bravolebrities, who were dressed in traditional or formal attire inspired by Nigeria.

While traditional Benin singers and dancers performed, a spokesperson from each family presided over the ceremony. Guobadia, 57, hails from Benin City in Nigeria’s Edo State.

Williams stated that she wanted guests to feel as though they had “taken a flight and landed in Benin” when they entered the reception hall, which was decorated in “beautiful colors of browns and rose golds and tans and creams.”

“The other thing I wanted was trees in the room,” she added. “I want[ed] it to feel like an inside/outside space, but luxurious.”

Additionally, Williams and Guobadia requested that guests remain unplugged because they “want[ed] people to be in the moment.”

Even though the author of “Pursuit of Porsha” was “adamant” that the event should pay tribute to the businessman’s roots, she made sure that the food included southern favorites like “fried lobster, steak, and cornbread.”

According to People, the happy couple will say “I do” in an American celebration on Saturday evening in front of 350 guests.

It is anticipated that fellow “RHOA” cast members Kandi Burruss, Kim Zolciak-Biermann, Cynthia Bailey, Drew Sidora, and Monyetta Shaw will attend the church ceremony, which will be followed by a ball and party.

The list of attendees also includes T.I. and his wife Tiny Harris.

“It’s our last marriage, OK? We belong together. That is it,” Williams, who was previously married to Kordell Stewart and engaged to Dennis McKinely, told the publication. “It’s a blessing to be able to find your person. It doesn’t happen often.”

The star of “Porsha’s Family Matters” said that she would be “absolutely” open to having more children with her new husband.

“I’ve always wanted to have four kids, so it’s a blessing that he has three younger ones that are at home a lot of the time, and then I have my Pilar,” she shared.

“But as far as me being able to experience having a child with him, I definitely want to explore that. I’m not sure how many that will include, but I definitely know it wouldn’t be more than two.”

After dating for a month, the newlyweds got engaged in May 2021. They met during Guobadia’s marriage to cast “friend” Falynn Pina on “RHOA” Season 13.

CEO Imran Shah of Shah Enterprise NJ makes a prominent mark of his as a self-made multiple business owner.