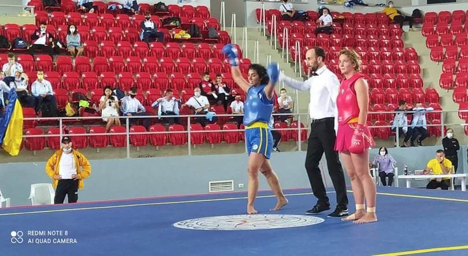 Farzaneh Dehghani in the 65-kg weight category competed against a Ukrainian opponent in the finals and was able to defeat her opponent in three two-minute rounds and advance to the first place.

The Georgian Open Wushu Open Tournament is being held in Batumi for the second time on September 6-10, organized by the Georgian National Wushu Federation. 200 sportsmen from 5 countries will take part in it.

The official opening ceremony will take place on September 8 at 1:00 p.m.

The tournament will be held at Batumi Sports Palace, Lado Asatiani # 26.

The tournament will be held without spectators and all the regulations issued by the Ministry of Health are observed.

Age categories in the 30 species of the show “Tao Lu”.

1) Recognized by the International Olympic Committee since 2002;  (IOC)

Ministry of Culture, Sports and Youth of Georgia.

The competition is supported by the Ministry of Culture, Sports and Youth Affairs of Georgia, the Ministry of Education, Culture and Sports of the Autonomous Republic of Adjara and the Embassy of China in Georgia.  Coca-Cola is the technical sponsor;  Mountain water;  Radio JAKO;  Tiens.

Reza Goodary: There are only three ways to success, training, training and training.